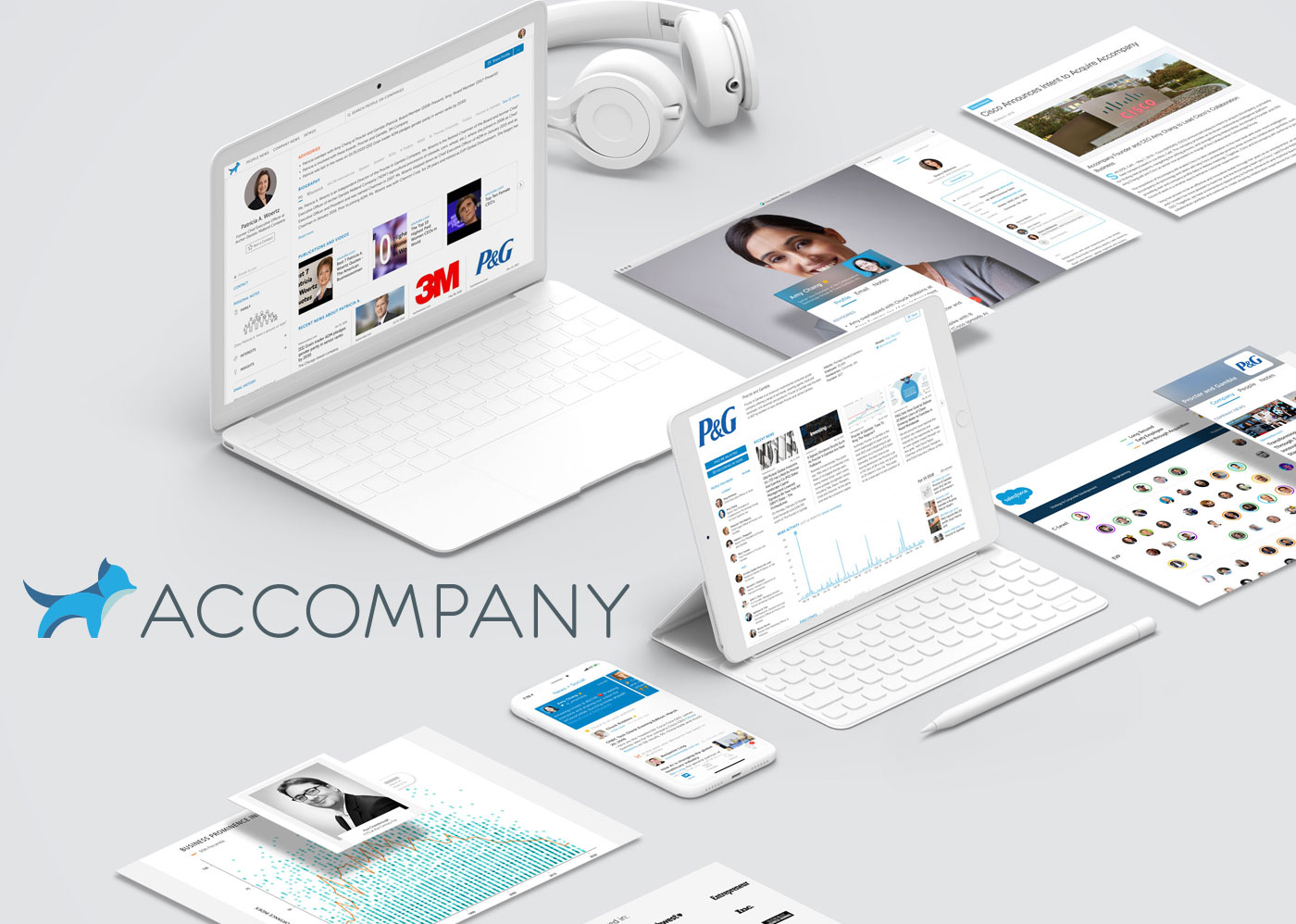 It’s been a blast to see my Google peers go off into their next adventures over the years. Amy Chang, who ran Google Analytics, departed a few years ago and has been quietly working on Accompany, a product she calls your “virtual chief of staff,” blending calendar, CRM, news and more into a single mobile app. Amy is starting to talk more broadly about her company and open up the beta, so I asked her to do a Five Questions with me.

So happy for @_amychang and the team; Accompany is already a pretty great product. cc @hunterwalk https://t.co/iLsQrMN5tP

Hunter Walk: Accompany is very polished for a Beta product. You decided to take an extended development period rather than releasing an early rough version and iterate in public. What were some of the tradeoffs in this decision? Was it influenced at all by your product tenure at Google?

Amy Chang: We’re building a virtual chief of staff. Those are some high expectations from users, and we wanted people to be able to have those magic moments from the get-go. Leslie Blodgett, creator and former CEO of BareMinerals, told us recently that she was looking for a reason to reach out to someone new without being “that person.” Accompany sent her a news article one day about a foundation he was working on and she was able to reach out and say, “I love what you’re doing, and by the way we should get together about this other thing.” Accompany was able to create an opportunity for her to reach out. And we’ve got so many of those stories. We love hearing about those serendipitous moments.

I think you can’t help but be influenced by a place if you’re there for over seven years. Google’s a fantastic place. There’s one thing that Eric Schmidt used to say when I first joined that’s stuck with me ever since: start with the power users, the people who are going to be the most demanding. Once you can serve them, you can serve almost anyone. That’s what we did. By putting people like Godfrey Sullivan (Chairman of Splunk), Leslie Blodgett (founder, former CEO of BareMinerals), Hilarie Koplow-McAdams (President and CRO of New Relic), April Underwood (VP Product of Slack) and Mark Garrett (CFO of Adobe) on the platform from the very early days, we made sure we got our asses kicked regularly. They’ve given us so many ideas and helped shape the product in a thousand different ways.

HW: You also had the opportunity to raise quite a bit of capital based on the credibility of the team and expansiveness of the vision. How did you make sure that having too much money too early didn’t create lack of urgency in your company culture?

AC: You’ve known me for a long time. I think you’d probably say that everything about my very being is urgent! I think I was born impatient and have always been one of those people that even when standing is shifting from one foot to the other, aching to move. This sense of urgency about the market window is shared by the team. Some people are more easygoing than others, but we all know that there’s a window and we need to get out there during that window. This team also understands that every user matters, so once you take users on, you better serve them as well as you can, as fast as you can. So, the funding hasn’t touched that sense of urgency. It did give us the runway and the means to build a product that requires an underlying data platform and an intelligence layer that sits atop that platform. That takes time and it takes money – two things funding helped enable.

HW: How do you run your Board Meetings? You’ve got impressive experience serving on public company boards such as Informatica and Splunk. How did that inform the composition and goals of Accompany’s Board?

AC: We spend about 10-15 minutes covering all of the housekeeping stuff. Then the bulk of our time is spent on things we’re in the midst of vigorously debating within the company and figuring out what we want to do about those issues. We usually prep long-form reading materials for these discussions as opposed to slides. That way, the board can see where we’re coming from in more detail. This levels the discussion so we’re all aware of the assumptions that went into the preliminary point of view. We’ll also show early mocks and visuals of new concepts, which helps spur more definitively positive or negative reactions to an idea. We want the reactions, whether sharply positive or negative.

Being on boards, and being with teams for the whole day, the one thing I’ve definitely figured out is that nobody wants to be presented at for the entire session. Board members are there because they actually want to be of use (hopefully). They want to engage in real discussion and hear about what’s really going on – not a sanitized version of events. That’s scary and hard for a CEO because you can’t control the conversation, but I’ve found it yields much better results for everyone involved when you can really lay it out there on these specific topics.

HW: Tell me a little bit about how you hire at Accompany?

AC: First of all, we’re 50% women. It wasn’t intentional, it just happened to work out that way. We’re really proud of that and proud that we have a lot of diverse points of view in one place We also seem to attract people who have founded and sold their own companies, which is great because they come in seasoned, and with a lot of learning they can apply to our stuff. Our engineers hail from Google, LinkedIn, Salesforce, Dropbox, and a bunch of different startups, which means, when we face a problem, we’ve got people who’ve done it at scale previously, as well as people who’ve had to do it with minimal steady-state cost and with a whole lot of scrappiness.

Small plug – we have high standards, but we also know that to get the best talent, you sometimes have to move very quickly and decisively, which we’re not afraid to do.

HW: There’s a ton of young product managers who want to follow the path you’ve taken – run a large product at a great tech company, serve on Boards, found their own company. What advice would you share with them?

AC: I’ve made so many mistakes along the way. That’s always the first thing I want people who come to ask for advice to understand. And I have those 3am wake up and can’t go back to sleep for worrying moments all the time. It’s good for people who are just starting their careers to know that too, so that when they’re totally scared out of their minds of failure, or whatever else, they know it’s 100% normal.

There’s something my good friend David Hornik said to me once that always stuck in my brain. If you’re thinking about something right before you fall asleep and right after you wake up, then you need to pay attention to that. It’s your gut instinct telling you something, and even if you’re not quite ready to go there yet, you should at least pay attention to it and spend some time thinking about it. That’s how I felt about wrestling with leaving Google for months before I actually left. It’s a hard place to leave and I felt really conflicted about it for a long time. When David finally said that to me, things fell into place in my head.

The other piece of advice concerns anyone who’s in the midst of big life a decision, like where to work next. Usually they have multiple offers, they’ve done the background research, and they’ve agonized over each of the choices. So I tell them to go somewhere that makes them feel as if the world is open and rife with possibility for a day and be alone with no devices to distract them. For me, that’s Stanford campus, but it’s somewhere different for everyone. Just go and sit for a day with your own thoughts. Leave your computer, your lists of possible outcomes, your pros and your cons, and open yourself up to that gut instinct.

I think oftentimes, we get into this state where we overthink, analyze to death and start ignoring our gut. That’s something I’ve learned as I’ve gotten older — as long as you’re going somewhere, you can course correct later on. There’s very little that can’t be fixed, and knowing what you don’t want is almost as important early on as knowing (and appreciating) what you do want.

“We wanted people to be able to have those magic moments from the get-go“ —@_amychang https://t.co/pfk88k3Sqo via @hunterwalk