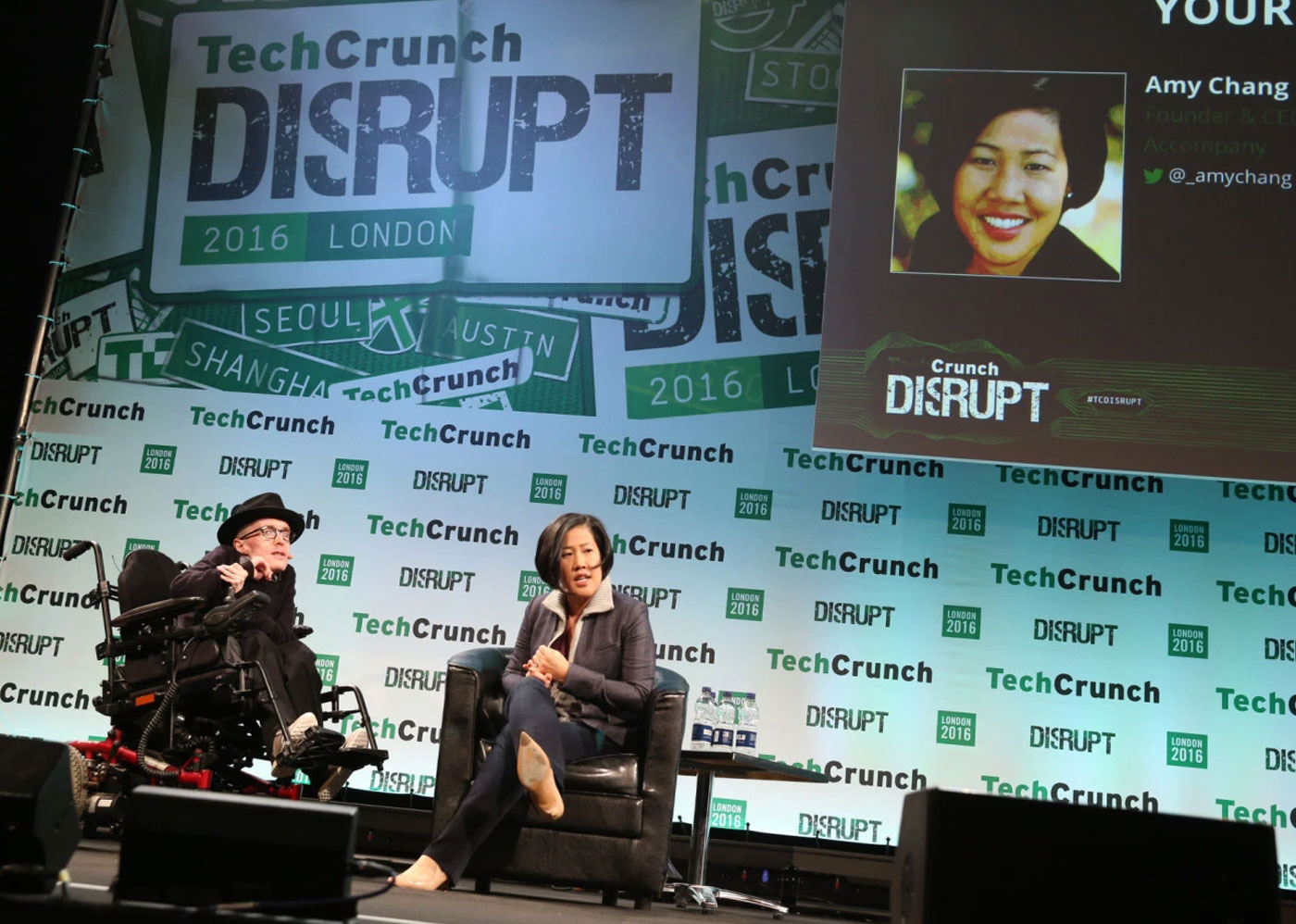 Accompany, an app that Amy Chang bets will be able to replace the chief-of-staff or personal assistant of an executive, launched just a few months ago. The app had been in the works for a while, and now that it’s finally out the door, it’s time to step on the gas — so it’s launching in the U.K. in a beta.

Chang’s bet is that there’s a slot for an app that can replace the chief of staff role, which many executives have in order to manage their complicated schedules and lives. And even in hiring those people, they still may miss out on critical information that might help with those conversations and meetings. It’s an experience Chang has had personally while she was at Google, she said on stage at TechCrunch Disrupt London 2016.

“The first time I walked into a room of 20 Intel executives, and I thought some Google searching would do it, that’s when I got my ass handed to me,” Chang said on stage. “It was bad, they had had a re-org the Monday before and I missed it. I thought to myself, ‘there has got to be a tool to help me not get caught flat-footed.’ If they just had a very bad quarter, I want to know that too. We looked everywhere for it, it just didn’t exist, and we literally tried everything.”

Chang also said on stage that the company raised an additional $20 million in financing led by Ignition Partners with previous investor CRV also participating. Accompany launched in beta in the United States in August after Chang and her team had worked on the service since 2013.

“If you want terms on your terms, then raise long before you raise,” Chang said. “Invest the time to get to know people.”

Accompany looks to create a more complete download of all that information by pulling a ton of information from unstructured sources — whether that information is public or simply notes you’ve left yourselves about that person — in order to create a sort of dossier for those meetings and conversations. That information even drills down into the financial performance of the company an executive runs that you’re meeting.

That’s also good for smaller companies which might not necessarily have the resources to bring on a chief-of-staff or assistant role, but still need to have all that relevant information. When trying to build a relationship, even that small idle chat at the start of a conversation is important to build rapport with a potential future business contact. And it also gives people an idea of when is a good idea to reach out to one of their contacts, such as when they are notified that they got promoted or changed jobs.

The Accompany service proper works as an app, a Web client and also a Gmail plugin that gives that download in a way that’s palatable and readily accessible. There’s also plenty of reasons to come back beyond just meetings by offering news alerts about a user’s contacts and companies they may follow, as well as large dossiers on companies they can cross-reference as they do research.
Chang had been at Google for around seven years, working on the Google Analytics team. She said that it was one of the hardest decisions she could make — with people even telling her how much money she was leaving on the table — but one that in the end she just had to do it.

“Less than 20% of my time was spent on user-facing things, and life is just too damn short,” Chang said.

Since starting Accompany, Chang said she’s had to unlearn a lot of things she picked up at Google. In particular, she said she’s had to change her management style, as running a company of 40 people hands-on is quite different from managing hundreds of people on the same team at a larger company like Google. That comes down to the hard parts — like firing people — as well.

“It makes me physically ill to have to fire someone,” Chang said. “If, again, this person and their performance keep coming into your head over and over as you close your eyes at night, and you find yourself having conversations with team members, you already know the answer. You just don’t want to know the answer. The thing that has been very clear, it’s affecting the team even more than it’s affecting you.”

For Accompany, the challenge is going to be staying ahead of the competition. The service was in development for a long time, though it was able to roll out in the United Kingdom pretty quickly following its U.S. launch. There are a lot of plugins for Gmail that handle small slices of what Accompany does, as well as some automated digital assistants like Clara. All of these might not be an entire suite, but they all clearly have the potential to become more robust products that end up accomplishing that suite of tasks.

The company has previously raised $20.6 million from ICONIQ Capital, CRV and Cowboy Ventures.